Dominated by a huge 22 metre high poppet head, the surface of the mine is a highlight in itself!

The surface of the mine contains original buildings and equipment that were essential to the operation of Central Deborah in its mining days.

You will be amazed by the Engine Room which contains the Winder that was installed in 1945 and is notable as the only complete working example in Australia. It is still used daily by our mine crew who meticulously maintain the underground workings.

The surface also displays buildings and plant equipment from other mines that used to operate in Bendigo, including the Deborah Extended, South Deborah, North Deborah and Monument Hill Mines.

Be sure to visit the interpretive museum to see the “Hand of Faith” gold nugget replica … the Hand of Faith weighs 27.2kg, was found near Bendigo and is significant as the largest gold nugget ever found with a metal detector. 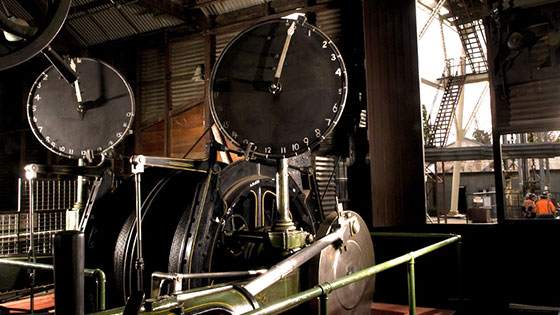 Tour Duration:
Allow 30 minutes - 1 hour.
Access:
The surface is wheelchair accessible.
Cost:
Access is free of charge. A ticket is required for entry. Explore the surface is included with all underground tours.
Tour Times:
Open daily from 9:30am - 4:30pm. (PLEASE NOTE: Central Deborah Gold Mine will be CLOSED from 21-25 February 2022)
COVIDSafe:
All visitors aged 18 years and above need to show proof of double vaccination to visit our site. Before visiting, please read our updated COVIDSafe conditions of entry here.
Bookings:
BOOK NOW
Copyright © 2018 Central Deborah Gold Mine. All rights reserved. Website designed by Studio Ink & developed by Thrive Web Design